By Chin chin
It's been more than a week since I last posted. We've been busy attending the year end recognition day of our children.  Since the school programmed the recognition day in 4 days time categorized as to preschool, primary, intermediate and high school, we had to come back to the school in 3 different schedules/days.

We had 3 children who received recognition for the past school year. Janel, who's in Kindergarten 1, ranked 4th in their class and got 3rd place in their Math Quiz Bee. Yuan, who's in Grade IV, ranked 6th. And Emmuel, who's in Grade V, was a perfect attendance awardee (he indeed deserved this award because he really didn't want to absent himself from class even if he's not feeling too well). I'm thankful to God for helping them receive such awards.

Though Kristel, who's in Grade 1, did not receive any award, I'm equally happy with her academic performance. She actually got the highest grade average among the siblings but she did not make it to the top 10 of their class. I hope and pray that my children would continue to shine more and more in their studies, not just for the prize but also for the glory of God! 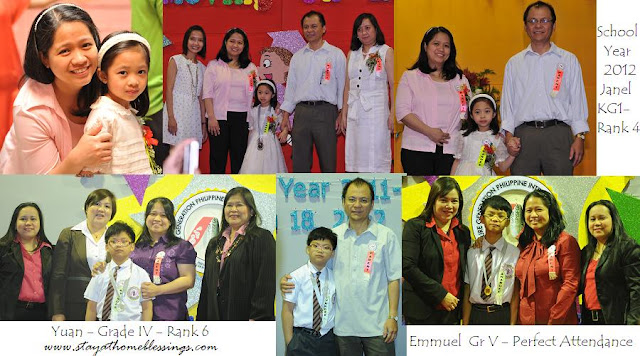 Recognition of the student's achievement is not the same as it was during our time. I remember only ranks 1-3 were recognized when I was in elementary then up to rank 10 when I was in high school. Anyway, I believe recognizing the children's achievement will help encourage the kids to do better in their schooling.

Oh, before I forgot, I also got an award. I blogged about 4 weeks ago about the Brainbench Bench Games. It's a competition among members of Brainbench all over the world who take tests for various skills certification. (Usually the tests are not free except during the days of the competition) Those who got the highest score in any skills test won a prize aside from the certification.

Since the tests are free, I took some skills tests relevant to writing (to add to my freelance writing certifications). Surprisingly, I got the highest score in the Spelling category, so I received a one year free membership at Brainbench. Another blessing, thank You, Jesus.

Now that school is over, I hope you and your kids would enjoy a well-deserved summer vacation.

Chin chin said…
I do hope we'll have an enjoyable summer vacation.

I'd say that the Brainbench tests are more difficult than those in oDesk. There are a few that are free like US English writing skills.