By Chin chin
Hello everyone. I was busy on some days this quarter making costumes because my kids were involved in different school activities that require them. As much as possible, I don’t buy the costume from the market right away. If I can make it as a DIY project, I do it. First and foremost, it helps us to save money and second, I want doing projects. It allows me to use my brains and use the little creativity that I have.

So, in this blog post, let me share with you some of the costumes of my kids and how I made them.

The last week of September was designated as Science Week by the school. In line with this, the Grade 1 pupils were asked to choose a scientist that they are going to introduce to the class and they were to wear a scientist or mathematician costume. I know that the typical costume of a scientist is simply to wear a lab gown or perhaps have a business attire.

The first thing we did was to look for the scientist that Angel is going to present. After some Google searching, we found Sally Ride, who is an astronaut and an astrophysicist. She was the first American woman in space aboard the space shuttle “Challenger” in 1983.

The next thing I did was to look for images of the patches on Sally Ride’s uniform. I downloaded them and printed them on sticker paper. Then, I put the sticker patches on the appropriate places on the white top.

I also made a simple astronaut helmet, but this one is just for props. It cannot be worn on the head.

How to make an astronaut helmet 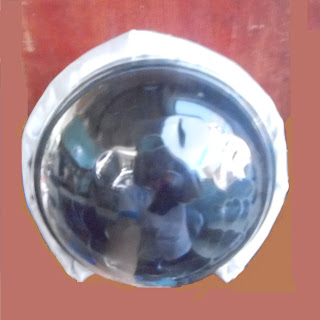 
My 2 other daughters had their mass dance this week during their school’s 27th Foundation Day celebration. Janel wore an igorot costume, while Kristel wore a lapay or seagull costume.

The igorot is one of the ethnic groups in the Philippines located in the Cordillera Administrative Region which include Benguet, Ifugao and Mountain Province.  To make the Igorot costume for girls, I bought a black t-shirt and 2 pieces of cotton cloth with ethnic prints at P35/yard. These were not the real Igorot cloth, which far differs in texture and design.

I cut a 4.5-inch wide strip from one edge of one of the cloth for the headdress. The  rest of the cloth was used as a wrap-around skirt. I sew a running stitch on the edges of the cloth, first, then it’s ready. I just wrapped it around Janel’s waist and secured it with a pin.

I took the other cloth and folded it lengthwise until it is about 3-inches wide. I just tied it around Janel’s waist like a belt.

How to make an Igorot headdress

We also made a paper beads necklace as an additional accessory to what we already have at home.

How to make Paper Beads necklace

• Cut strips of colored paper. (Janel and I used a colorful magazine page, but you may want to use a paper with solid colors.) You may do a straight cut or a tapered cut for a different design.

• Roll a paper strip around a toothpick and put a dab of glue when you reach the end of the strip. Do this with all the strips of paper.

• Get a yarn that is long enough for a necklace and insert this into the hole in the middle of the paper beads.

• Tie the two ends of the yarn when you have inserted all the beads.

Kristel and her classmates performed the Lapay Bantigue folk dance. Lapay is the local name for seagull in Barangay Bantigue, Masbate. This folk dance imitates the graceful movements of seagulls and was created by a certain “Lola Felissa.”

The costume for the girls is very simple. They just need a white t-shirt and black leggings. Then they made a belt with strips of white crepe paper. They tied their hair into a bun and put a floral headdress.


We were not able to get a full body picture of Kristel, so I just embedded their Lapay Bantigue folk dance video below so you can see how their costumes looked like.

Elizabeth O. said…
How lovely! I love the Igorot costume, very traditional! These are awesome ideas.
March 3, 2017 at 2:48 PM

Michi said…
I was thankful that our school doesn’t require costumes in most of their activities unlike in our former school that we need costume almost every other month. I remember the Igorot Costume, I bought it at P250 pero wala pa 1/2 yard ang tela so it is really nice to DIY costume.
March 3, 2017 at 2:49 PM

Chin chin said…
I really saved a lot with that Igorot costume and I can still use it for other costumes in case my kids need some again.
March 3, 2017 at 2:51 PM

Mommy Maye said…
Nice! As of now, I never made any costume for my son’s event at school. The school have few events kasi but maybe in the next years. I’ll save this post. Thanks for sharing.
March 3, 2017 at 2:54 PM

Mommy Mecheel said…
Thanks for the tip Sis! This will serve as my guide since my child gets involve in School Activities too.
March 3, 2017 at 2:57 PM

Nilyn Matugas said…
We can really save on DIYs! My dream is to buy a sewing machine that I can use in the future. It’s on my bucket list – to learn to sew. hahaha.

Chin chin said…
I have a portable sewing machine, but my in-laws borrowed it, so I had to sew manually. Having a sewing machine at home is a big help for DIYs.

Melgie said…
I think that Igorot Headress is super cute and fun to have. Thanks for the DIY tutorials Sis, will try this next time.
April 10, 2017 at 11:07 AM

Allan said…
Nice ideas for a costumes. The astronaut is great idea.