Thank You Lord for Answering Our Prayers

By Chin chin
Three weeks ago, we lost Jack. Jack is our dog. Below is his picture. I really don't know what is Jack's breed (can you tell?), but I really like him. 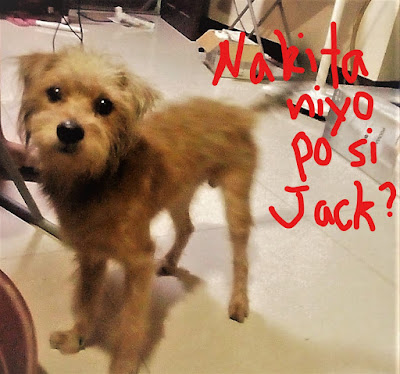 We got Jack about three years ago from my brother-in-law. Jack is a small and very affectionate dog, well, at least to me and my husband. Perhaps because we are the ones who really take care of him. I remember when Jack fell very sick (I really thought then that he would die), I was the one who patiently fed him, gave him a drink (both water and medicine) and I really prayed that he may recover. Surprisingly, he did recover. We were all very glad.

To others, Jack is unfriendly, especially strangers. The moment someone knocks on our door and gets in our yard, he barks non-stop. We appreciate he's being like that because he really guards our home and calls our attention when needed.

So, when we lost Jack, we really, really felt sad. This is how he got lost. We don't tie up Jack. We let him go loose but he just stays within our yard. On a Thursday morning, my husband went out and forgot to close the gate. Jack followed him up to the gate of our subdivision. I think my husband saw Jack but didn't think that Jack wouldn't follow back home.

For some reason, Jack ran out of the subdivision to the highway. We couldn't look for him right away because we were busy getting the kids to school. Later in the morning, we looked for Jack but we could not find him anymore. The last instance that someone saw Jack was at the gasoline station.

For three days we did a search for him but without success. We're hoping and praying that Jack would come back home, but I guess he doesn't know how. We just prayed that wherever he is, at least he is safe, that maybe someone found him and took care of him.

On the following Sunday morning, while on the way to church, we prayed that maybe we could find Jack. To our surprise, we saw Jack with a leash held by a lady. We stopped our car and called Jack and he recognized us. The lady said that she saw Jack and kept him as he seemed lost. She takes Jack for a walk every now and then so that maybe his owner could see him. And we did, thank God! God bless that lady for taking care of Jack (Her family actually takes care of stray dogs and they already have 14, Jack would have been the 15th).

We were so happy that we found Jack. And I know Jack was also very happy. Actually, we saw tears in Jack's eye. God is really so good. He answers prayers even what seems to be insignificant ones. A big THANK YOU, LORD!

So always remember these words from Scripture:

Ask and it will be given to you, seek and you will find. Knock and the door will be opened to you. ~ Matthew 7:7