How Do You Deal With Tantrums in Toddlers? 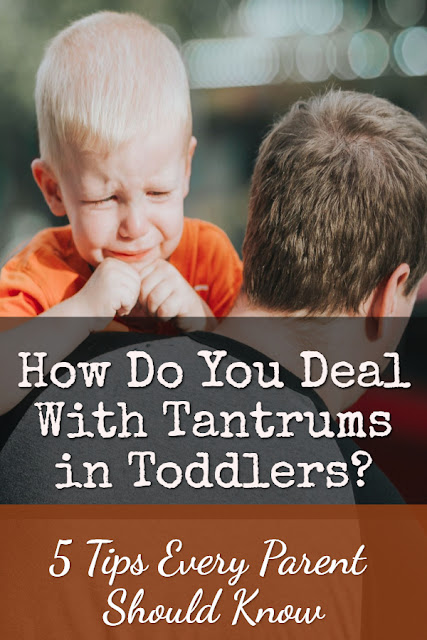 My 5 children are all grown up (meaning going to school ranging from 5th grade to college). But I could still remember the times during their toddler (2-3 years old) and preschool years when they, sort of, are having tantrums. Usually, they would engage in non-stop crying if they want something that they can't have. When I see toddler or preschool children of other parents who are "tantruming" - crying out loud, hitting, kicking, etc, I'm really glad that my kids are over that season.

Young parents get terrified when they are about to deal with the “terrible twos.” Be of good courage, you will outlive the toddler stage. Sometimes, it is frustrating when you can't understand why your child has a tantrum. But at this young age, it is a normal part of their childhood that they just think about themselves - how they feel, what they need and want.  Until they learn to share, they see everything including toys and food as belonging to them.

When your child is having toddler temper tantrums, there are different effects. You may feel embarrassed especially if your child is screaming and having tantrums in public. It feels like everyone is looking at you. What would you do? Would you just give what your child wants or you would do something else to diffuse the situation?

To help deal with toddler tantrums, here are a five tips that every parent should know:

I'm definite that this technique works especially when at home. If your child is having tantrums, for example, if he/she wants something that you already said you can't give, just ignore the crying or tantrums. He/She will get tired eventually and stop crying.

Ignoring a toddler is not harsh.  If a child is squirming on the floor or screaming for a cookie, continue talking as if you haven't noticed the tantrum.  Eventually, he/she will get the hint and stop it.

If the child is taught how to behave at home, it is likely that he/she would also behave in public. But in case he/she doesn't, then you can still use this technique but keep watch over the child. If you win, the child won't do it again. I remember my toddler son was trying to throw a tantrum in the mall because he wanted a toy. My husband and I let him cry without giving the toy, he stopped eventually and didn't do it again.

Toddlers would try to manipulate you (mom and dad) in public by throwing tantrums when they are denied something that they want.  Some parents, because of embarrassment, would give in to quiet their child. But a child is very perceptive. Next time he/she wants something, he/she will use tantrums.

Just saying “no” to what your child wants would be enough in general. But a better response is more likely if the toddler understands the meaning of "no."


According to pediatricians and other child experts, verbal commands should be followed up by action. Actions still do speak louder than words! This type of communication is key to successfully teaching your toddler the meaning of "no."

For example, when you say "no" to your child who is trying to climb over a table, your "no" should be backed up with action - the physical removal of your child from the table and redirecting his/her attention to something else. Also, make sure you use your firm and stern voice if you have to repeat the "no" and remove him again.

When a toddler is throwing tantrums, be calm. If you scream and the child screams, the situation will be wildly out of control. Keep using the same calm voice you use when they are behaving to get your child to calm down. If you show your child that you are angry by raising your voice, it might solicit a different response. He/She might stop the tantrums, but out of fear and it could lead to resentment later on.

Getting mad at them is not the answer especially if there are reasons for their tantrums. Sometimes toddlers become cranky when they are tired or hungry. They don't want to be dragged around if they are already tired. So, it's better to schedule your errands after their nap time.

Low blood sugar can also cause toddler tantrums. If you think you will be out longer, carry some healthy snacks with you to give to your kids when they get hungry.

Use positive reinforcement.  If without positive attention, a toddler will behave badly in order to get some attention.  Acting out and throwing tantrums may be a sign that the child lacks attention. Don’t wait for this to happen.

Compliment your child after doing something good, such as going to the potty successfully or putting away their toys. Give applause or a high five when your child displays good manners like saying “please” and “thank you.”

5. Be Consistent When Giving Punishment

If you use "time out" at home when dealing with a tantrum for bad behavior, you could also do something similar in public. Tell your child to sit on a bench or in the car for five minutes. Eventually your toddler will learn that you are not a pushover and will start to behave.

Do you have toddlers? How are you coping if ever they throw tantrums? Please share your tips in the comments.
Baby and Child Care Parenting