10 Easy to Prepare Back to School Lunch Ideas 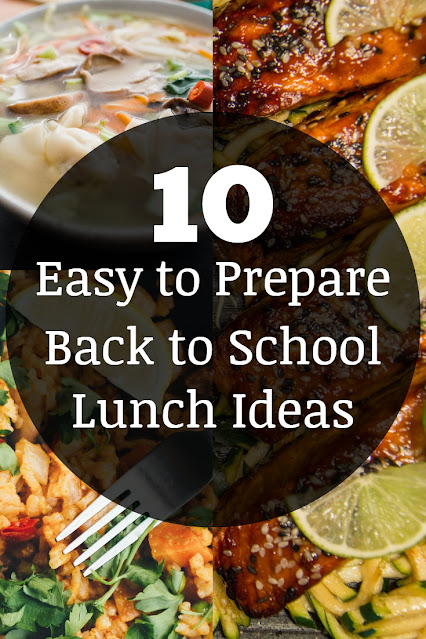 Two of my children are now back to school. But they don't leave the house at all since all classes are held online. My daughter is complaining that her butt hurts for sitting about 4 hours in front of the computer. I told her that she can get up once in a while to stretch a bit in addition to the one 20-minutes break she has in between her classes.

I mentioned in this post that my children have been helping cook our lunches or dinners since last May when their last school year ended. Let me just say that is one of the BEST things we did in the last two summer vacations. The vacation was extended this year, so they had plenty of time taking turns cooking.

Now all of them would be back to school soon. Can they still help cook our meals? Of course, they can! But most likely they would cook our dinners. That means I would need to prepare their lunches again.

"School lunch" preparation this time is different. I don't need to wake up early in the morning to cook and pack their lunches since they will be eating lunch at home.

I somewhat like this setup because my children can eat healthier dishes. I can cook recipes particularly Filipino viands with soup (ulam na may sabaw), which usually have meat and vegetables in them. For me, it's easier to cook these dishes. When they were bringing packed lunch to school, I usually avoid preparing these dishes because it could be messy and soups are best eaten hot.

Also, I could serve more variety of viands to them because I can have more time to prepare. Unlike when preparing early in the morning, I usually end up preparing either fried foods or adobo over and over. Why? Because they are quick to prepare and they don't spoil easily.

Ok. That's enough for my small talk. Let me just share 10 of the easy-to-prepare dishes that I prefer cooking for my children. These are nutritious, home-cooked meals. While cooking boiled rice, which usually takes 30 minutes to cook, I also cook the viand, which may be any of the following:

Sinigang is a sour soup with meat and vegetables. The meat I use could be pork liempo (belly) or buto-buto (ribs), fish (bangus/milkfish, salmon, or tuna) or shrimp. The vegetables I add depends on what I have, which could include radish, kangkong or water spinach, string beans, okra, and eggplant. Other people also add gabi or taro.root. The traditional way to make the soup sour is to use tamarind as in the video below. But most of the time I just use a Sinigang mix.

Here's a video of how to cook Sinigang Pork.

This soup dish has chicken sauteed in garlic, onion and ginger. Then, I usually add fruit/vegetables like green papaya or sayote (chayote), chili pepper leaves, cabbage and malunggay. If I have broccoli flowers, sometimes I also add this.

This soup dish is easy to prepare but it takes longer to cook especially if using beef because it takes more time to tenderize the beef (unless you're using a pressure cooker). After boiling the meat until tender, you add in vegetables like potatoes, green beans and Tagalog petchay. Some people also add corn.

There are a lot versions when cooking this dish. But even just the basic way of cooking is a hit with my children. This is easiest to cook because you just saute the meat in garlic and onion, then add 1-2 laurel leaves, peppercorn, vinegar and soy sauce. Let it simmer until the meat is tender. You may want to adjust the taste with a bit of sugar, salt and pepper.

My kids like it with sauce. But some people like it dry or the meat is somewhat fried, which is also very, very tasty just like in the video below.

This is probably the easiest dish to cook out of the ten listed here. I just season the broccoli and salmon with salt and pepper and then I put them in a non-stick double pan. I drizzle a little bit of canola or rice bran oil. Then, cook it for about 5 minutes on each side (depends on the thickness of the salmon). Take note, I don't really use an oven to bake the salmon. My children love the simple taste of this dish.

Here's a video of Kusina Master cooking Baked Salmon with Mediterranean Sauce. It's not the same as my recipe because I don't use lemon and I did not make any sauce. But you might want to try Kusina Master's recipe. His dishes are always yummy.

Knowing how to cook the breaded chicken or fish fillet is the key to making different kinds of dishes. You just need to create different kinds of sauces like honey garlic sauce, buffalo sauce, ala King sauce or teriyaki sauce. But even if you don't have time to cook a sauce, it's good to partner with catsup, chilli sauce or tartar sauce (no extra cooking necessary).

What I do is marinate the chicken or fish with salt and pepper. Coat the meat with flour or cornstarch, dip in eggs and then coat with bread crumbs before frying until golden brown.

The video below shows a different way of making breaded chicken fillet and then goes a step further by making ala king sauce. It works this way also.

This recipe is also a hit with my kids and it is easy to make. Just fry the marinated boneless bangus or milkfish, then cut it up into small pieces. Chop some onion and green chili pepper (or small chili pepper if you like), then add it to the bangus. Add some calamansi juice and mayonnaise.

This dish is very versatile as you can cook any meat (I use beef, chicken, pork, canned tuna or sardines sometimes) and any vegetables. I like to prepare it as simple as I can. Just saute garlic and onions, add thinly sliced meat and soy sauce or oyster sauce and cook for a few minutes, then add the vegetables (in the order depending on how it is easily cooked, for example, add carrots and Baguio beans first, then the broccoli or cabbage last). Just add salt and paper to taste. The key here is not to overcook the vegetables.

The simplest dish I cook using this style is tuna (canned) with carrots and cabbage. My children like it very much.

The chef cooking a stir-fried dish here used a slightly different technique. He stir-fried the meat separately, blanched the vegetables, then stir-fried everything.

Just like the Baked Salmon, this is also easy to prepare. First prepare the filling of the fish by mixing together chopped onion, ginger, tomato and kamias (optional). Rub salt and pepper on the fish and put the filling in the belly. Wrap the fish with a banana leaf or foil then steam it for about 30 minutes. Serve it hot with a dip made with soy sauce, kalamansi and garlic.

See the video below for a demo of cooking this simple dish.

The first time I tried to make siomai, I actually followed Nadia Montenegro's recipe, the one showed in the video below. It was delicious. Just watch the video below to know how to cook this recipe.

I hope you enjoyed watching the videos of the different recipes shared in this blog post. How about you? What are your top easy to prepare dishes that you serve as lunch or dinner for your children? Please share your thoughts in the comment box below.

Have a nice day!

FaB News said…
This recipe is phenomenal. It looks really tasty. Thanks for sharing it with us.
September 15, 2020 at 8:12 PM

Julia Hess said…
I love the fact that they help prepare meals and lunches. Such a wonderful life skill to learn before moving out on their own. Learning when it isn't even school time!
September 16, 2020 at 3:30 AM

fabulousperks said…
All these recipes look amazing I'm sure they are all tasty. I'm going to try the Stir Fried Meat and Vegetables first.
September 16, 2020 at 9:27 AM

Nina said…
As a teacher, I will also have to start packing my lunch a few days a week for school. These recipes look delicious. I would definitely like to try making a few of them.
September 16, 2020 at 3:30 PM

Lyosha Varezhkina said…
looks super delicious! I don't have school kid but I do have a need to make box lunches so your recipes are very much appreciated
September 16, 2020 at 5:10 PM

Priya|how to be a positive parent said…
That's a great list of recipes and it will be very useful to any parent looking for great lunch ideas.
September 16, 2020 at 8:11 PM