God is a Father to the Fatherless

There is a fathering crisis! I've read some sad facts from Fathers.com that children from fatherless homes are more likely to be poor. They become involved in drug and alcohol abuse and 4.3 times more likely to smoke cigarettes. They are twice as likely to drop out of school and suffer from health, emotional and behavioral problems.

Boys born out of wedlock are more likely to become juvenile offenders. While girls 15-19 years old are more likely to engage in premarital sex and as a result become pregnant. These are the gathered facts from across America but I think a similar scenario holds true across the globe. Is there anything we can do about this? 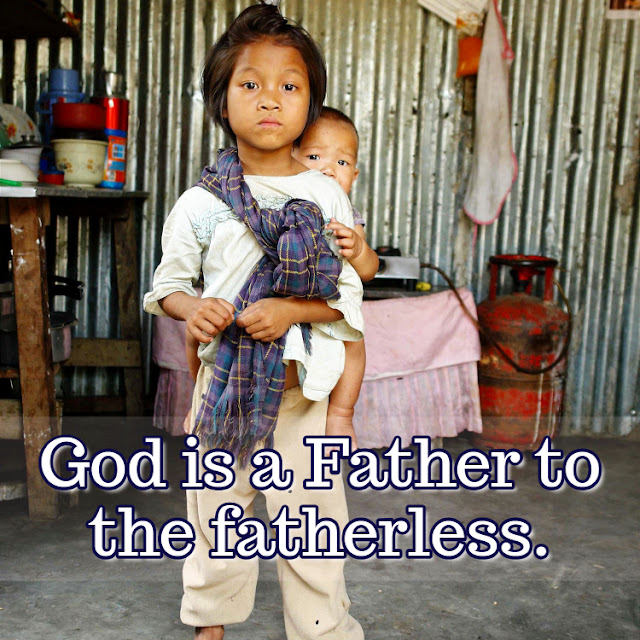 God is a Father to the Fatherless

God is a father to the fatherless.

though my father and mother forsake me, the LORD will receive me.

This is the first message that we can share with people whom we know are fatherless or those who are being raised by single moms.

It would be difficult to answer the question of why God allowed them to be fatherless. But it would sure make a difference if they would know and believe that a Heavenly Father loves them and is always on their side in spite of their absentee father.

The Heavenly Father already demonstrated this love in sending down His Son Jesus to reach out to the world. Through the sacrificial death and resurrection of Jesus, we are adopted into God's family by virtue of faith.

John 1:12 says this to all who received him, to those who believed in his name, he gave the right to become children of God. It is wonderful to have a sense of belonging especially for those who feel that they do not belong.

Knowing and experiencing God's love within the family of God has the power to change the life and destiny of every person including the fatherless.

Romans 8:32 says He who did not spare his own Son, but gave him up for us all; how will he not also, along with him, graciously give us all things?

With God as the Heavenly Father, every orphan and fatherless child can always run to Him and receive an answer to every need.

Childinfo.org estimated that there were 18.5 million orphans 0-17 years old in the world as of 2007. U.S. Department of Health and Human Services says there were 123,000 children in the United States who are waiting to be adopted in September 2008.

How can the fatherless know about the Heavenly Father's love? God is looking for people to do this very important calling.

Isaiah 1:17 says learn to do right! ... Defend the cause of the fatherless.

James 1:27 also wrote Religion that God our Father accepts as pure and faultless is this: to look after orphans and widows in their distress ...

God cannot do it without people. He is commanding us to defend the cause of the fatherless, to look after the orphans in this world.

There are many ways how we can help care for the orphans. We could pray for them, speak for them, teach or mentor some, give them support and those who support them, be a foster parent, or better yet adopt a child into your family.